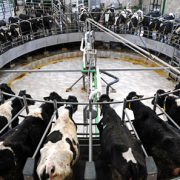 Traditionally (and not so long ago in the long timeline of human history) some nomadic peoples began to keep herds of animals and to milk them. Milk was a valuable source of protein and fat which could be cultured or fermented to make cheeses and curds (yogurt) and stored.

There are two main risks from milk products.

A nomadic herder would know if an animal was sick and the milk would be obviously ‘not right’. Just like any farmer with a milking cow today. Or the micro-dairies that were driven out of business in the mid 1990’s by big dairy demanding legislation to require pasteurization of all milk.

But sadly the large commercial dairy herds of today are very different, they are intrinsically unwell. From the sprays on pastures to veterinary pharmaceuticals to their living conditions and routine.

Second – the hormones in the milk of a lactating animal.

Simple, we go back to traditional peoples and their knowledge. They didn’t drink glassfuls of flavored and sugared milk, it was a precious source of rich fats and vitamins, so it was fermented into a curd (yogurt, kefir) or a cheese and stored.

Microbes digested and transformed the hormones.

In Australia raw milk used to be available from small dairies which were subject to strict hygiene and health standards and produced an excellent product (like raw goats milk – many country mums who couldn’t breast feed could successfully and safely use it instead of formula). However about 25 years ago big dairy companies lobbied for the law that all dairy products sold must be pasteurized – it put small dairies out of business overnight.

Dairy is big industry. Pastures are chemically fertilised, calves are taken away to slaughter or to production, cows are treated like machines in the factories that dairies have become.

And now ‘Pasteurisation’ allows raw milk inputs to carry a higher microbial count. Too high. Our immune systems can recognize dead bacteria, but not the intestinal contents of disintegrated dead bacteria – one of the reasons milk is allergenic. The heat of strong pasteurization kills beneficial enzymes, hardens the calcium and denatures proteins.

The quality of milk used to be visible by how much cream was on it. Since homogenization we never see the cream because much of it is taken off to make other products and the milk is thickened with added milk powder (while the label still says 100% milk).

Is milk a useful food?

Anyone with health issues (especially digestive) is well advised to totally clear dairy out of their system for at least 30 days and not to re-introduce it until the health issues are resolved. And no doubt better off totally avoiding it as much as possible. There are plenty of other sources for protein and fat and calcium is better absorbed from vegetables. A majority would have some level of lymphatic congestion and dairy is sure to make it even more clogged.

Yet dairy is nutritious in small amounts as curds and cheeses. Our culture has so many foods that include dairy it can be difficult to go without it.

Cheeses and yogurts have value in moderate amounts and ghee is an excellent cooking oil. Don’t forget the soft white cheeses, a fresh ricotta is good.

Kefir is well cultured and has incredible amounts of beneficial bacteria for the gut, but it must be home made with kefir grains. The commercial products are too simple with a quick set pot using freeze-dried grains.

For fresh milk in teas and coffee, try to find un-homogenized and to only use minimal amounts.

The best drink is water, not a big glass of milk flavoured with sugar!

Sprouts – the Healthiest Salad is the Cheapest