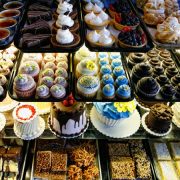 Yes, and they’re in so many popular foods!

They’re superb at creating crisp-crumbly biscuits, crunchy crackers, moist cupcakes and flaky pastries. A chocolate can be customised to melt in the mouth not in the hands. The smaller fat crystals make shortenings with smaller air bubbles to stay in the batter longer and produce reliably fluffy cakes. Less hydrogenation can produce a softer type of chocolate for a doughnut topping and a more hydrogenated oil makes the coating of individual boxed chocolates harder. Cooking with vegetable oils causes pastry layers to collapse and gives them a greasy feel; a hydrogenated product keeps the pastry layer separate making them airy and crisp. In margarines, partially hydrogenated oils are spreadable at cool or warm temperatures without being greasy or soggy. In muffins and other baked goods hydrogenated oils make them moist and long lasting.

Hydrogenated oils are great for frying doughnuts, potato chips and chicken nuggets. These oils don’t smoke up at normal frying temperatures and may be used many times over in batch frying.

They are the most fantastic food ingredient ever invented and are the backbone of the food industry. Ever since fear of cholesterol and saturated fats was created they’ve been thrown in vast quantities into our food. For almost 100 years they’ve not only been unchallenged but recommended by health experts and governments.

Research scientists with disturbing findings about hydrogenated oils committed professional suicide if they published – nobody wanted to know.

And now the dangers of hydrogenated oils are undeniable they’re being replaced by refined palm oil.

Right back where we started, with a saturated fat…

Could Vitamin C be Dangerous?

Why we need the six tastes of food
Scroll to top