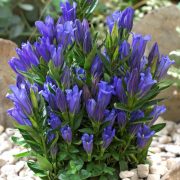 Bitter herbs are used to stimulate and enhance digestion.

They surely have a strong taste but it’s no use trying to disguise or flavour it; the bitter taste creates the beneficial actions.

Theories as to how they work.

The simplest theory is that the powerfully bitter compounds create a sympathetic nervous system response which increases circulatory blood flow to the abdominal organs. Another possibility is that the gastric mucosa is stimulated directly.

The well established mode of action is the bitter taste buds causing a nerve reflex to the brain which stimulates the vagus nerve. The vagus response increases gastric acid and pepsin secretion, primes gallbladder motility and the pancreas.

These effects were not found in early experiments where dosing and then testing the stomach environment found little or no change. However it’s been established that food is needed for the digestive actions and secretions to happen.

Digestive bitters relieve constipation, flatulence, poor appetite, heartburn and nausea. They benefit allergies and help with failure to thrive in children. They help by-pass the effect of stress on poor appetite and digestion.

Bitter greens may be added to a salad.

If using herbal fluid extracts, the dose is only enough drops to give the bitter taste; about 5 to 10 drops in 20ml of water. Best sipped 15 minutes before food to stimulate bile in time for the meal.

Swedish Bitters is a good formula and widely available.

How Glucosamine works to relieve Joint Pain
Scroll to top