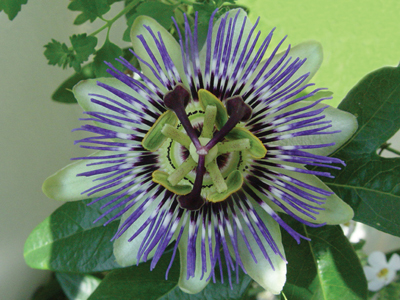 The traditional herb for stress, anxiety and insomnia.

Passion Flower is the herb of choice when treating intransigent insomnia. It aids the transition into restful sleep with a ‘narcotic’ hangover. It may be used wherever an anti-spasmodic is required e.g. in Parkinson’s Disease, seizures, hysteria.

It can be effective in nerve pain (neuralgia) and shingles. It may be used in asthma where there is spasmodic activity.

The word Passiflora is derived from passio, the Latin for suffering. Flora comes from the Latin name of Flora, the goddess of plants, flowers and fertility in Roman mythology. Incarnata means “in the flesh”. Passion flower was brought to Europe where it became widely cultivated and was introduced to European folk medicine, becoming a popular traditional phytotherapeutic remedy as well as a homoeopathic remedy. Throughout the world it has been traditionally use for anxiety, nervousness, constipation, dyspepsia, mild infections, insomnia; for dysmenorrhoea, epilepsy, insomnia, neurosis and neuralgia and currently consumed for its sedative effects, as an analgesic, anti-spasmodic, anti-asthmatic, wormicidal and sedative.