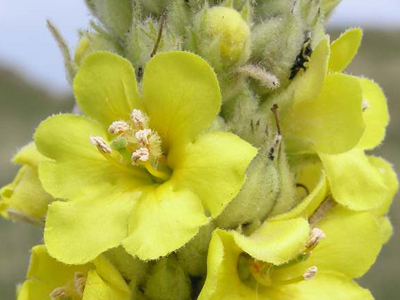 Mullein’s demulcent and relaxant properties give it a strong soothing action so it is widely used to treat dry, irritating coughs, influenza, asthma and bronchitis.

Much loved in folk medicine to assist breathing, the leaves are a beneficial respiratory remedy for toning the mucous membranes and treating lung congestion. The flowers are famous for their use as an external earache remedy when infused in oil.

High content of coumarins should be avoided during hepatitis or jaundice.

More than 2000 years ago mullein was described as a treatment for ‘old coughs’ by the Greek physician, botanist and author of De materia medica, Dioscorides. Similarly, in 19th century Ireland, it was considered a leading remedy for tuberculosis (TB), which plagued the population, and large amounts of it were cultivated for this particular purpose. At the time Dr. Quinlan, of St. Vincent’s hospital (Dublin, Ireland), reported positive findings in six out of seven cases where mullein was used to treat tuberculosis (also known as consumption) patients. The World Health Organisation (WHO) has declared tuberculosis a global emergency and, as antibiotic resistance increases, the hunt for new treatments continues. A recent Irish study called “What’s in a Name? Can Mullein Weed Beat TB Where Modern Drugs Are Failing?” found that mullein has a large number of synonyms, and old local nick names, which connect the plant with mycobacteria (notoriously tough micro-organisms, known to cause
tuberculosis and leprosy, that have an intrinsic resistance to many antibiotics). The authors concluded the study by saying “Whether the link is coincidental, or rooted in true antimycobacterial actions, it merits investigation. An ancient plant, an ancient infection, an ancient link and a modern-day cure?”