Low fat eating, is it really the healthiest way to live?

From our doctors to the Heart Foundation we’re told to to avoid fat, especially saturated fat. Supermarkets sell huge amounts of margarine and the cooking oil shelves are full of “vegetable oil”.

Should we carefully avoid oils? Is saturated fat really dangerous?

It would be great to start at the beginning, but when was that? It could be when humans were hunter gatherers. Or when small herds of animals began to be kept and milk was used as a food (usually cultured as a curd or a cheese so it could be stored). Or maybe a few thousand years ago with the beginning of agriculture and the introduction of grain. But the great changes civilization brought to humanity didn’t really affect consumption of traditional fats until the 20th century.

Just before World War 1 a study by the Russian pathologist Anichkov found that rabbits fed purified cholesterol developed atherosclerotic plaques in their arteries. That is, their arteries became clogged with cholesterol (remember, rabbits eat grass, cholesterol is not natural to their diet).

Around the same time the soap and candle makers Proctor & Gamble began making margarine from cotton seed oil. Cotton seed is an abundant by-product with a high oil content. Proctor & Gamble began to solidify this oil by hydrogenation so it could be used as a raw material for making soap. Since the product looked like lard the company began selling it as a vegetable fat for cooking purposes. It was cheaper than butter and lard and required no refrigeration, which further lowered its cost in a time when refrigerators were rare. The hardness of margarine can be controlled during the hydrogenation process, making it a low cost and adaptable raw material for the food industry. With clever marketing as an affordable modern alternative to butter during the Great Depression margarine established its place in the American diet.

During World War 2 the Philippines and other coconut oil exporting South Pacific islands were occupied by the Japanese. America increased domestic oilseed and margarine production. After the war domestic oilseed producers did not want to lose market share to coconut producers and advertised against it, promoting vegetable oils as the healthier alternative.

By the end of the 1950’s public opinion had turned against saturated fats like butter and coconut oil. The 1950’s also brought a sharp rise in heart disease.

Yet during the previous century when people still ate unlimited amounts of butter, eggs , lard, beef and pork heart attacks were virtually unknown. By the 1950’s the incidence of heart disease had risen to account for more than 30 percent of all deaths.

In 1953 Ancel Keys conducted his Six Country Study (his Seven Country Study was published in 1970). His data clearly showed that the more saturated fat in the diet the higher the rate of coronary Heart Disease (CHD). 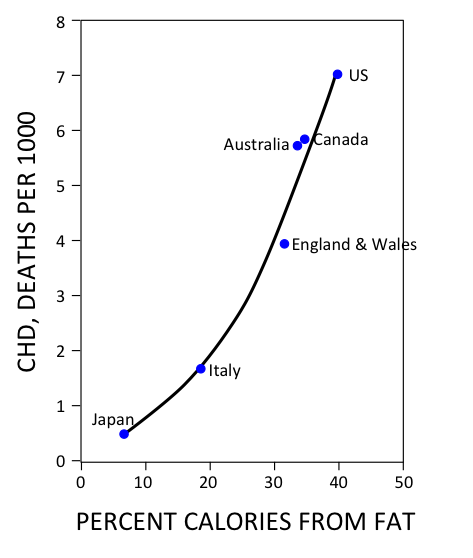 However Key’s published data was fraudulent; the study was actually of 22 countries from which he chose the 6 that showed the graph he wanted. Here is a chart with all the data points. As you can see it’s impossible to draw a single curved line through all the dots! Note that Denmark, Norway and Sweden (6, 17, 19) have high fat consumption with low death rate compared to USA and Canada with similar fat consumption. 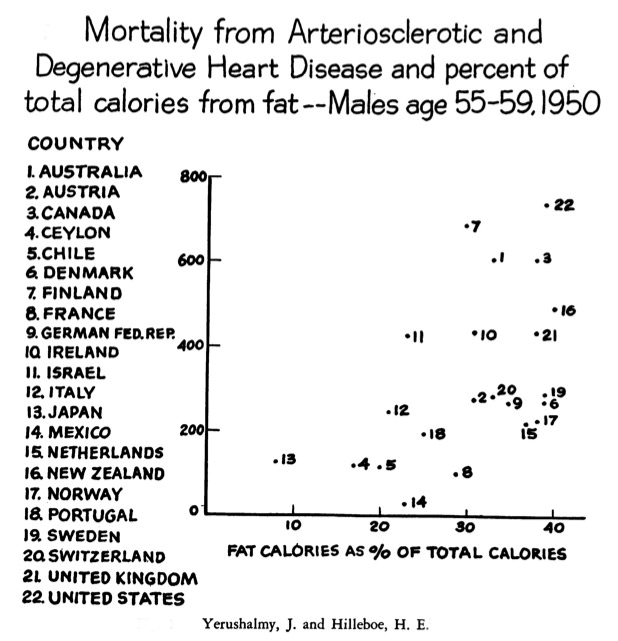 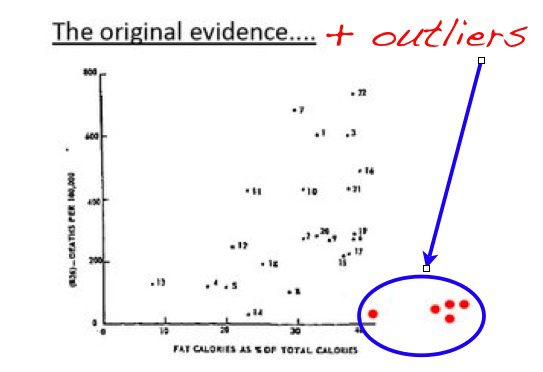 This data becomes really interesting when the “outliers” are included (traditional cultures with very high fat consumption); the Masai and Rendile (east Africa), the Inuit (arctic Canada & Greenland) and the Tokelau (south Pacific). 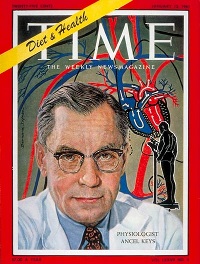 The diet-heart hypothesis became well established in 1961 with a Time magazine publication linking dietary cholesterol, serum cholesterol and heart disease. It’s true that high cholesterol is linked to heart disease but it is oxidized cholesterol that causes the problem. Non-oxidized cholesterol is protective and essential to all cells. The biggest factor contributing to oxidation of cholesterol is inflammation driven by high polyunsaturated fats from seed oils plus excess dietary fructose. This dramatic dietary change is due to the huge change in oils provided by industry to our supermarkets and recommended by the medical system.

By the end of the 1950’s, saturated fats were out of favor while the new ‘vegetable’ oils pressed from seeds became increasingly popular. These polyunsaturated and hydrogenated seed oils were viewed as heart healthy substitutes for natural saturated fats.

Incidently no oil comes from a vegetable; it comes from seeds, nuts or fruit!

Industrialization has dramatically changed our diet. Sugary colas were invented in the 1890’s. Modern mills began refining grains into white, nutritionally depleted rice, meals and flours. A huge increase in the consumption of refined carbohydrates, polyunsaturated and hydrogenated seed oils replaced the natural saturated fats. In the 60 years from 1910 to 1970 coronary heart disease escalated from an unrecognized problem to the cause of death in over 50 percent of our population. In the year 2009 heart disease killed 600,000 Americans.

We have a number of modern diet stressors; higher amounts of carbohydrate eaten as sugars and starch plus industrial seed oils, all of which may be converted to problematic fats. This would be compounded by lack of anti-oxidants and omega 3 oils in the diet, creating oxidative stress and inflammation.

The change from healthy traditional fats to manufactured and industrially processed seed oils has caused incalculable misery. It is one of the biggest health frauds of all time.

This is not a recommendation to eat excessive amounts of saturated fat. Yes, it’s nourishing, an excellent fuel and building block for good cholesterol, but let’s go back to first principles; how was it traditionally eaten? Our forefathers ate a lot of animal fat but those animals ate grass. It’s difficult to get good data on the fat profile of browsing animals but it’s about 45% saturated, 45% mono-unsaturated and 5% polyunsaturated; all fats showing a variety in the length of their molecular chains.

So if we eat meat make sure it’s from pastured animals; find the most chemical free and ethically grown source. Grain feeding causes problematic changes to the fat profile of the animal, especially a deficiency of the EFA’s (the Essential Fatty Acids – EPA and DHA). The original source of these fats is grass, and browsing animals have the stomachs and digestive ability to create ample amounts of EFA’s.

We can metabolize a fair amount of any of these but no doubt it’s better not to consume excess of any or limit ourselves to only one kind.

If you’re vegetarian good sources of EFA’s are flaxseed, walnuts, chia seed, sprouts, algae and dark green leafy vegetables such as kale. These foods provide a good serve of ALA (alpha linolenic acid) which is the pre-cursor molecule to the functional forms we need, EPA & DHA. The enzyme doing the conversion needs Magnesium, Zinc and activated B6 so be sure your diet includes enough of these.

Nuts and seeds also provide small but useful amounts of GLA which when combined with EPA becomes the main prostaglandin to reduce inflammation. The largest amounts of GLA are found in Evening Primrose oil.

Flaxseed oil is a popular EFA supplement, this long chain polyunsaturated oil is very prone to oxidation (randicity) so higher quality oils are bottled under nitrogen. Of course the nitrogen leaves the container at first opening so even if its refrigerated it will be rancid very soon. If you’ve ever wondered why that bottle gets waxy this is the answer. A better way to get flaxseed oil is to freshly grind a spoonful of organic seeds in a coffee grinder and mix with a suitable food.

Go back to Fats & Oils 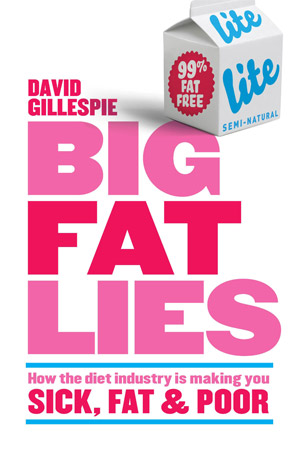 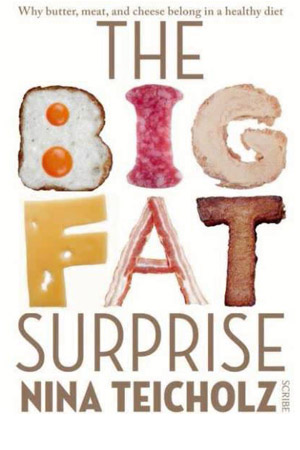 Here are two recent books which explore the changes in dietary history and the problems caused. These books contain extensive references in the bibliography which support the contentions described in this article.

Remember that the ‘diet dictocrats’ (to quote Sally Fallon) do not like to be challenged and will work strenuously to silence dissent.

At the time of writing (December 2016) the Australian Health Practitioner’s Regulatory Authority (AHPRA) has been holding secret hearings, from which there is no appeal, to investigate the work of Dr Gary Fettke. A respected orthopaedic surgeon for over 23 years, Fettke has been responsible for looking after the bulk of Northern Tasmania’s cases of diabetic food complications. So what is his crime? Suggesting to diabetics that they could benefit from following a low carb diet to reduce the risk of losing their feet. He’s faced two years of investigation and AHPRA believe he’s not qualified to give nutritional advice despite excellent outcomes with his patients.

Speaking last month at an Australian Senate inquiry, Fettke asserted: “My patients are lying around in hospital with obesity-related conditions, amputated limbs and non-healing rotting flesh. I believe that it is the nutritional advice they have been given that has put them there in the first place” Studying the science and biochemistry of dietary guidelines, he found them, ”wanting in substance and riddled with vested interest politics.”